Throughout history sitting postures and the way we have placed our limbs whilst sitting have varied from period to period and culture to culture. Starting at the very beginning of human culture, Stone Age man was influenced by nature and natural posture. 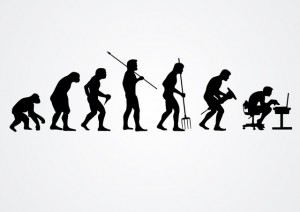 In these early times, sitting took up such a small portion of an extremely active existence, much of which was spent hunting. As a result, squatting became the most logical and natural position allowing swift transition between quiescence and motion whilst maintaining an upright back posture. Modern day squatters are still evident in some cultures, and some, such as the Japanese, also advocate the absence of some furniture, preferring to sit cross-legged. In fact, our Westernised industrial method of sitting is still, arguably, far from being the most common (or indeed the best) method of sitting world-wide.

Certainly the thousands of years of history that preceded the last 50 years or so were all spent a lot more active than our modern day counterparts, and as such the need for a decent ‘work’ chair would have been laughed at! ‘Work’ wasn’t spent sitting down! ‘Work’ was spent ploughing the fields, or down the mines. The only people that tended to sit down for any length of time were schoolchildren! And they had ergonomic sloping desks! In the 1800’s!

It is only in the last 50 years with the information technology and ‘entertainment’ revolutions, and population explosion both fuelling a more sedentary lifestyle that we have found ourselves sitting down as a way of life. We wake up and spend a few moments sitting up in bed contemplating the day ahead. Then, we sit down for breakfast, sit down in our cars, trains or buses to get to work where, most likely, we spend 8 hours sitting in our office chairs until, at 5 o’clock we get back into our cars and make our way home where we sit at the dinner table before having our well-earned ‘rest’ and collapsing in a heap on the sofa to watch a few hours of television! And this is our lives now. Maybe the evolution of man has finally come to an end. We evolved into a machine designed for movement, to hunt, to gather, to work the fields. And now we are slowly evolving into a machine that is winding down, losing its ability, or willingness, to move.

This is why we need to promote movement in the office. Chairs that move, sit-stand desks that encourage us to stand up more often, to vary our postures. We are even now at a stage where ‘treadmill desks’ are being sourced by companies to tackle the ever-increasing issue with musculoskeletal disorders caused by sitting down for far too long!

Our goal now, as it has always been, is to find chairs that “move automatically with the body as the glove moves with the hand”. (Peter Opsvik, in conversation with Andy Edwards, 1992-3)